Our Blog is Moving...


After a few years on this Blogging platform, we've decided to move back to our Wordpress Blog.

You can find us again at: https://vallum.wordpress.com/.
Posted by Vallum Magazine at 15:09 1 comment:

Read what's new with Vallum this holiday season in our monthly newsletter!

'TIS THE SEASON FOR VALLUM'S SAVINGS!

Treat someone you love (or yourself ) to Vallum! Print & digital magazine subscriptions! Chapbooks! Back issues!

To see our fabulous holiday savings, visit our website at
www.vallummag.com/tistheseason.html
Posted by Vallum Magazine at 14:38 No comments:

Paul-Georges Leroux is an exceptional Montreal/Quebec poet. His poetry resonates with incomparable depth; and his writing is amongst the best French-language poetry being written today. /ez

Posted by Vallum Magazine at 18:45 No comments:

The Vallum Award for Poetry 2014 WINNERS! 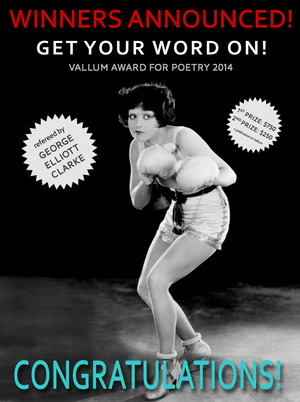 
Thank you to everyone who entered this year's contest.
Winning poems will appear in issue 12:1 "Surrender."


To view poems of previous winners, please visit our website HERE!
Posted by Vallum Magazine at 13:06 No comments:

Mark Morgenstern’s film, “Before I Go,” in competition at the Festival du nouveau cinema, and which premiered at Cinema du Parc in Montreal October 12th, is about the movements of a house. It is not a ‘home,’ there are no puppies or kittens or soft fluffy images. The cinematography is bleak. There is focus on parts of the house requiring repair. But it would seem that the most central part of this strange, haunting, is the house’s need for attention. Although it is dismembered and dismantled, there are figures who appear as fragments, figures who would seem to belong there, but who have no identity, as they are portrayed in the film. There is a disconnect between the physicality of the house and the physicality of the human forms. It is almost as if the two are caught in some kind of disparagement of time—and they cannot communicate. The ‘house’ is often considered to be symbolically associated with the psyche. Bachelard has written on the importance of the home and how it is central to one’s conception of identity. Morgenstern shows us the house and he shows us some human forms, but there is no relationship between the two. The house is not a home, in Bachelard’s interpretation of home. So, what is this house we observe, so closely, so fearfully?

Morgenstern’s technical brilliance and associative cinematography are so impressive that one is left breathless. The house is trying to speak—is it a haunted house? It very well could be. The most chilling part of this film is towards the end, with a woman sitting on a bed, with her back towards us. She could easily be construed to be some kind of ghost or figure of madness. We seem to drift with this woman’s presence, and this is a key point in the film where I felt a truly dangerous ‘presence.’ The house needs attention. The psyche would seem to be unraveling.

The magnificence of this short film is that it creates the aura of exteriority. We are not inside it, even though we view inside the physical house. And this is what many family houses are like in today’s soulless and mindless societies. Morgenstern’s, “Before I Go,” is a cutting-edge portrayal of the breakdown of the family unit, of the suffering of individuals who try to create community and communion within their houses, but fail. And the true horror is that families today--no longer within a caring and nurturing environment or a home—are transformed into objects in an essentially mad series of unconnected pieces and parts. This is the stunning force behind this film.

Posted by Vallum Magazine at 12:23 No comments:

The world’s soul has gone incognito
as the devil incarnate.

Angels lay stagnant at the bottom
of my shot glass.

In between inaudible words are
spoken, air bubbles surface; frantic.

The cries of angels begin to fade.
One by one a begging ghost can be
seen cutting through the lukewarm
surface of my straight bourbon.

And now I know, what was pure in
my life has become no more.

The angels lie in the bottom of their
liquid coffin, wings motionless,
voices silent.

Father forgive me, for I have sinned...

I cannot seem to stop this madness!

the angels have but all disappeared from
my life...

One by one by one they go, sinking into
the depths of a past that they can never
come back from.

* for all those I have lost to alcohol, may you rest in eternal peace*
Posted by Vallum Magazine at 04:24 No comments: 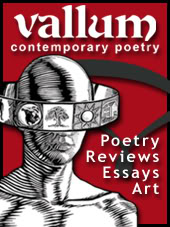